This short story was brought to life by our Kickstarter backers as a stretch goal for our Adventure Kit: Oath of the Frozen King. Get your copy here.

Blood soaked the snow the day the man-king died.

From its tunnels, the troll watched, as it had for centuries. It had seen the first snowfall, the coming of the ebon-haired men, the battle with the fair-skins, the raising of the stone keep amidst the craggy ranges of Winter’s Tongue. It had seen the birth of the man-king, and the width and breadth of his reign.

The troll watched now as the man-king – the one called Eirick – clutched at his belly, bleeding in the snow. His fetal squirming on the steps reminded the troll of a freshborn. The life of the man-king flowed from a dozen wounds, spilling across the ice and stone, pooling a vibrant crimson in the pristine snow. His crown – a mantle of elk bone and ice-blue sapphires – toppled from his brow and clattered down the steps.

The troll watched the blood, and listened.

The troll knew the power of blood – knew the secrets it held. Not secrets scrawled in tomes – but secrets it learned with its ears. With them, the troll could hear everything speaking. The tunnels it called home thrummed, speaking safety and solitude. The dull patter of endless snowflakes spoke of a coming blizzard. And the rasping scrape of the shifting ice deep within the Maw foretold a looming change – a shift in power.

But there was a new voice that day – the day the man-king died. The troll looked back to the king, whose face paled and hands trembled as he reached for his maul. His blood betrayed his mortality as it froze, and told the man-king’s secrets. The troll heard the whispers of the blood as it dripped and flowed and froze.

For years the man-king’s followers – who now surrounded him with bloodied blades – obeyed his every order. They spoke proud tales and sang songs of Good King Eirick, while he banished men and women naked into the tundra to freeze or crushed their skulls with his terrible maul.

These men standing over him now – the men holding the bloody daggers – these were his closest allies. Their loyalty had withered when Eirick killed their kin or cast their pregnant wives into the cold. “No place for new mouths to feed,” the king had said. “No kingdom for the weak.”

As the food grew scarce, and the cold grew stronger, Eirick’s leadership waned. He was uncertain, and though none would speak it, he was afraid. So he turned to the old ways – scrying and divination and portents and strange runes. Heeding his vizier without question or hesitation – the one who would be named Hand of the King in place of worthier men. And the Hand led the king further astray, and showed him things deeper in the ice, and in the Maw – and these things began to work their dark will.

It was always an odd thing, the troll thought, to watch a mortal die. They did not have the Gift, as trolls did. To watch wounds gape like laughing mouths, never closing. To watch skin turn white and brittle, like paper. To watch flesh become bone and bone become ash and ash become dust and dust become nothing.

The usurpers finished the man-king with a sword – a blade of pale, rippled steel, etched with strange runes that glimmered like ice in the midday sun. Through their jeers and curses, the king mustered the last remnant of his profane strength. He gritted his bloodied teeth, and between plumes of white breath, the king spoke. He made an Oath as they drove the blade into his heart. And a new voice spoke from the blood.

“Varnholme is mine in life – it shall remain mine in death. I shall return and restore glory to my kingdom. Then you will know the coldest winter – then you will suffer the slowest, surest death.”

The words carried on the icy winds, and the new voice scraped the inside of the troll’s ears, and nested in its mind. It trembled, its skin tingling. An Oath was made, and something old – far older than the even troll – listened. The troll turned to the tunnel’s frozen walls, and began carving the Oath into the ice. It etched the strange runes again and again – and for the first time in its long life, the troll had something it feared it might forget. 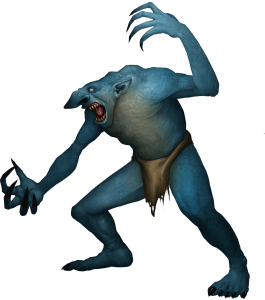 A storm followed the betrayal of the man-king.

The merciless blizzard clawed at the Maw of Black Ice, and a deep cold gripped the mountains. The troll, for the first time in centuries, entered the keep. The bloodletting didn’t stop with the murder of the man-king – no, it persisted as the loyalists clashed with the usurpers.

The troll’s ears heard everything. The screams of the wounded and dying roared against the stone, twisting into echoes. The prayers of the hopeless skittered along the ground as whispers. And the venomous curses of fathers hung heavy in the air, swearing vengeance for their murdered sons. Even through the deafening secrets crying out from the freshly spilled blood – the Oath spoke louder. And the troll listened.

The troll skulked through the halls, eating its fill of the helpless and wounded, prowling far from the din of battle. It tasted the secrets of the blood, and they tasted empty – hollow. The troll yearned to hear the Oath, and grew hungrier.

Winding deeper into the keep, the troll came upon the kennel. The hounds whimpered in their cages, and a woman knelt beside the man-king’s body. The king’s corpse lay on a meager bed of burlap and straw, prepared by the loyalists. The woman clutched the king’s cold hand within her own, and with the other cleaned his wounds. She did not stir as the troll approached. She was broken, and weeping.

The troll pulled her away from the man-king. The woman was weak, and did not have the Gift. The troll’s claws dug into her flesh and she bled. She died quickly, and fell beside her king. Her blood spoke, but the troll ignored it, focusing instead on the broad, gaping wound where the runeblade had plunged into the man-king and ended his mortal life.

The Oath spoke, and the troll listened. It clawed at the wound that the runeblade had left. Peeling back muscle, and gouging fat and bone to ribbons. Carving out a hollow,  leaving only the man-king’s pierced heart in the pit that was once his chest. With a single, black talon, the troll set to work, carefully scraping the words of the Oath again and again into the frozen heart of the man-king.

The troll shuddered as the runes took on a dim, blue-violet glow.

The Oath of the Frozen King echoed through the keep, and penetrated its walls, sweeping through the mountains and valleys of Varnholme. All fell subject to the Oath. Ice cracked, speaking the words into the frigid air. The hounds howled, and their baying spoke the Oath. The Oath was in the screams of the dying and the cheers of the victorious. The ringing of steel, the rending of flesh, the breaking of ice and the dripping of blood – they all spoke the Oath.

Varnholme is mine in life – it shall remain mine in death. I shall return and restore glory to my kingdom. Then you will know the coldest winter – then you will suffer the slowest, surest death.

But then, as quickly as they had flickered to life, the runes faded, and the man-king lay dead and frozen on the kennel floor. After some time, his loyalists returned to bury him, and the troll crept away, fleeing further into the keep.

The poor souls who couldn’t reconcile the truth of the Oath fled to their freezing deaths in the tundra. And the king’s loyal servants – old and new – rallied. They hung the Hand of the King by his neck in the great hall in his pristine ceremonial armor. The rope snapped under the weight, dropping his broken body from the joists, splitting the feasting table at its center. Those that remained carried the king’s frozen, marred remains deep into the keep. There, they buried him with his maul, his crown, and the runeblade that ended him, before sealing their Frozen King – and themselves – inside the tomb forever.

From within the keep, the troll watched. And with blood, and the razor tips of its spindly fingers, the troll carved the words of the Oath again and again into the walls.

Blood soaked the snow the day the king returned.

An age had passed, but the troll was ever patient. It waited as the keep crumbled and decayed around it, as the tundra all but consumed the stone halls, as new settlements sprang up around the base of the mountains. And as the settlers came, so too came those hungry for fame and gold. And quietly, steadily, the Oath called to them, promising both.

The Oath persisted. And the troll was faithful over it. The walls spoke the Oath, and the troll knew that the Frozen King would soon walk the halls of his keep once more.

The long winter ended. As the keep emerged from the thawing ice, the troll watched as fresh blood arrived to be spilled anew – fortune hunters who climbed those same steps the king had died upon, and dared to enter his keep. These meddlers didn’t know the words – didn’t understand the Oath. But they needn’t understand the Oath to serve it with their blood.

The four adventurers entered the Maw of Black Ice with sputtering torches and virgin steel. A small, lithe creature with daggers; a large man, wielding a woodcutter’s axe; and two women, one an elfen archer, the other robed and meek. The troll waited in the shadows, and heard the warm blood pumping through their bodies. In their hushed whispers as they moved deeper into the keep, the troll sensed fear.

From the shadows, the troll lunged, clutching the smallest of them. With its claws, it removed the screaming man’s arm and dropped his wriggling body to the ice. The large one, wielding his axe, swung the weapon wide overhead and brought it down upon the troll. Steel split ancient flesh, and the troll bled its black blood. The axe remained, stuck, and the troll took the man’s eyes and left his face a ruin with a rake of its claws. An arrow found its mark, and the archer – the elfish woman – nocked a second. But the troll shattered the bow in its grip, and split her head against the frozen wall.

The last one – the robed woman – spoke old words. The words of elves and dragons. Power swirled around her, red and bright and terrible. The troll sneered, and pulled her into a tight embrace against the blade of the axe, still protruding from its flesh. The steel did its work, and the words of power died on bloodied lips. The troll’s Gift closed its seeping wounds, and its flesh encased itself around the axe and the arrow – trophies of the kills.

The troll drank the secrets of the adventurers’ blood and scrawled the Oath into their dead  flesh.

The keep shuddered. The king stirred. And the walls spoke the Oath.

The troll took the bones of the adventurers. And with its gangled, wicked claws, began creating a crown – one of bone and ice.

A crown fit for a king.